Why does bouncing from beer to wine to spirits seem to cause worse hangovers than just sticking with one?

Plenty of people put a throbbing hangover down to the fact they switched from beer to spirits or wine to cocktails, and assume there’s some kind of complex chemistry going on in our bodies that punishes us for switching between alcoholic varieties.

Sure, experts say that working your way through a bar’s extensive drinks list will make you more hungover. But it’s not because of the variety of drinks you consumed – it’s purely the volume.

“If you had half a glass of red wine and half a glass of white wine or a small glass of beer and a small whisky, that’s mixing drinks but it’s not likely to cause a hangover as much as when you have half a dozen drinks of one thing and then add something else.”

RELATED: The amazing gains your body makes when you take a break from booze

Your behaviour in the lead-up and during a big alcohol night can play a role in how ill you feel the next day – particularly drinking on an empty stomach and not drinking enough water.

“Alcohol has a diuretic effect, which makes you need to urinate more frequently. If the only liquid you consume is alcoholic, you’ll become dehydrated, especially in warmer climates,” Professor Allsop writes on The Conversation.

“Heavy drinking also results in poor sleep. Alcohol is a soporific and many of us fall asleep more quickly after drinking. But we are less likely to get the quality rapid eye movement sleep required to wake feeling refreshed.”

If you think you get worse hangovers from red wine or bourbon, you might be right. They have higher levels of chemicals called congeners, which contribute to the taste and colour of a drink, and are believed to increase severity of a hangover.

Some people are also sensitive to certain preservatives or additives in drinks, which can make them feel off.

“If you find yourself particularly sensitive to certain types of beverages or certain brands, the simple advice is to stay away from those brands,” Professor Allsop says.

“It’s just like some people find they are sensitive to certain types of food.” 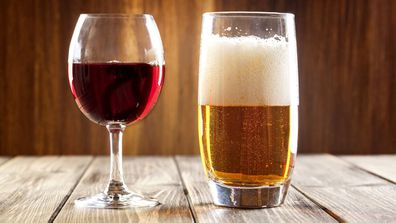 Ultimately Professor Allsop says that the biggest predictor of a bad hangover is how high your blood alcohol level gets.

“The peak blood alcohol that you reach seems to be particularly relevant,” he explains.

“If you drink a lot quickly on an empty stomach you may feel worse the next day than if you drink gradually with food over the course of an evening.”

People’s blood alcohol level tolerance will also vary depending on how often you drink.

“Most drugs – whether that be caffeine or tobacco or alcohol or any other drug – when we take them we build up a tolerance and that [means] you need to have more to have the same effect,” Professor Allsop explains.

That’s why people often report feeling particularly sensitive to alcohol after they have had a break, such as doing Dry July or through pregnancy.

Of course, some people report never getting hangovers, but Professor Allsop says that’s not necessarily cause for celebration.

“There is some suggestion that people who don’t get hangovers might be at greater risk of developing alcohol problems at a later stage because they don’t have an ‘off switch’,” he points out.

“Some people will think ‘I better stop now because I might feel pretty ordinary in the morning’, and that is probably a good thing because that’s saying, ‘You’ve had too much to drink mate, stop now’.”