A mosquito expert reveals what backyard tactics really get rid of mozzies — and which are just myths.

For most Aussies, the scent of summer is a unique combination of barbecued sausages, creamy sunscreen and chemical-y Aeroguard.

Now with 2020 signalling the return of a La Niña weather pattern, we’ve been told to brace for a bumper mozzie season.

But to the mosquitoes who come out to play at this time of year, summer is all about sniffing out the most succulent warm-blooded animal to prey on.

Different species of mosquito prey on different animals, with humans often their last choice of tucker. Certain humans find their exposed skin becomes a buffet for hungry mozzies if the bugs can’t find their preferred prey.

“We think that they pick up on the smells of our skin that are produced by the bacteria that live on our skin,” Dr Cameron Webb, a University of Sydney mosquito expert, told Coach.

We each have a different cocktail of bacteria on our skin – and some of us smell way tastier to hungry mozzies.

“There are anywhere from about 300-400 different chemical compounds on our skin,” Dr Webb explains.

“It’s like stepping into a bar with 100 different cocktails on the menu; they’re all made from similar sort of ingredients, but their taste and flavour can be so varied.”

So if you’ve got the right subtle scent for the particular species hanging around on a given day or night, then expect some itchy welts.

“It might be that a mosquito picks up on that certain cocktail of smells coming off one person and thinks that’s a little bit more attractive than the other,” Dr Webb says.

“One of the reasons for that is that [the person] might smell a little bit more like the animal that the mosquito generally would feed on.

Yep, there’s an unfortunate truth bomb for you — if you get attacked by mozzies, then you may just smell a little bird-like.

Some species are attracted to body heat, so Dr Webb says pregnant women are often more susceptible to mosquito bites, while other mozzies seem to like beer drinkers.

“A couple of years ago scientists put a whole bunch of blokes in a room drinking beer and a bunch of guys in another room who were drinking water. The mosquitoes were kind of released down this tube and wanted to fly towards the beer drinking room,” Dr Webb says.

“But the important message is that they had a preference feeding on the beer drinkers, but that didn’t mean that they were repelled by the non-beer drinkers.

“So if you’re at a summer barbecue and decide to stick with soft drinks, that doesn’t mean you’re going to be safe from mosquito bites.”

“We generally think that mosquitoes are more attracted to dark colours, particularly native blue,” he says

Some people claim that having vitamin B, eating garlic or bananas or Vegemite wards off mosquitoes, but Dr Webb says there is no evidence this works.

In fact, he says your best bet is to wear loose fitting, light-coloured clothing and applying chemical repellent liberally.

“Something like DEET and picaridin – they’re two of the most common and long-lasting formulations, and they’re safe to use,” he says.

“Essential oil-based repellents, using things like lavender or tea tree oil, don’t provide as long-lasting protection. You need to put it on three or four times as frequently as one of the so-called chemical repellents.”

When it comes to application of your repellent, make sure you spread it as liberally as sunscreen.

“If you miss a bit, the mosquitoes will find that little chink in your armour and come through and bite,” Dr Webb says.

If you’re burning a mozzie coil or candle, Dr Webb suggests choosing one that also contains insecticide, which will kill the mosquitoes hanging around.

For a daily dose of 9Honey, sign up here to receive our top stories straight to your inbox 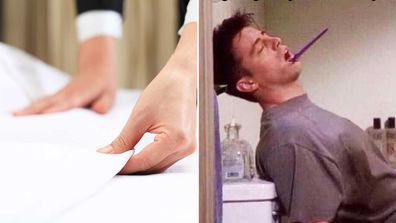 Too hot to sleep? Here’s five tricks to try