You showered this morning, are wearing fresh clothes and having an otherwise normal day, when suddenly you notice that stench.

Why do our armpits smell, and why more at some times than others?

It all comes down to an oily secretion from special glands beneath our skin, which are very prevalent under the armpits, and more active at certain times.

And despite what you might have heard on Instagram or TikTok, wiping under your arms with glycolic acid is not the best long-term solution.

The main sweat glands (called “eccrine” sweat glands) covering most of our body secrete primarily water, which is odourless and evaporates to cool us down.

However, our body is also equipped with a second type of sweat gland, called “apocrine sweat glands”.

They’re mostly around areas with lots of hair follicles, such as the armpits and groin. These glands secrete an oily compound, and become more active in response to stress, fear, anxiety, pain, and sexual stimulation.

The bacteria convert this sweat into fatty acids, and compounds that produce scents, giving off an odour with smell traces reminiscent of onion, cumin, and rotten meat.

The type of bacteria is relatively consistent between people, but the balance between each type can be different.

Genetics play a prominent role in how we smell. And because our apocrine glands respond to emotions, our thoughts and lifestyle can influence on their activity.

Even some foods, such a lot of red meat, can alter the smell. For both men and women, underarm hair can also cause a more prominent smell.

But what’s the role of this smell?

Apocrine sweat glands don’t generally activate until puberty, which is why body odour isn’t really a concern when we’re young. The scent also changes with the production of hormones.

For example, during the menstrual cycle, the most “attractive” smell occurs around the time of ovulation, when women are most fertile. However, the sexual function of body odour doesn’t appear to play a major role in humans.

Nonetheless, there may be some social relevance to our unique scent. Newborn babies can recognise their mother’s armpit smells a few weeks after delivery, and mothers can distinguish the smell of their own baby by about three weeks.

How to avoid the odour?

Our sweat gland secretions are odourless, so the longer the bacteria on our skin have to process the oils, the more scented compounds they can produce.

Antiperspirants reduce the amount of sweat released by the glands. This is usually due to ingredients such as aluminium, which form a temporary blockage in the glands.

Deodorants work to mask the odours with stronger, pleasant scents. They often also contain alcohols or ingredients that can turn your skin slightly acidic, or make the area less hospitable to bacteria.

Choose clothing wisely. If your skin is moist for a long time it gives bacteria a chance to grow. Clean clothes that allow for good airflow can help keep you smelling fresher for longer during the day.

Caffeine, some medications, as well as some illicit drugs such as methamphetamine, MDMA, heroin and cocaine can increase sweating, which will affect body odour.

What about antiperspirants and glycolic acid?

You may have heard antiperspirants containing aluminium could cause cancer. The Cancer Council has called this a myth and a rumour, with no scientific studies specifically linking the use of these products to cancer.

Nonetheless, it is wise to consider the cosmetics or chemicals we put on our skin. If you find your antiperspirant or deodorant is causing irritation or rashes, try a product with different ingredients or consult a doctor.

A recent trend on TikTok and Instagram suggests using glycolic acid (often used as an exfoliant for the face) on the armpits to reduce smell.

Theoretically, adding this chemical to your armpit will alter the environment under the arms. This can inhibit bacteria growth, and assist to reduce body odour.

However, it could irritate the skin, particularly under the arms where there is a lot of friction, and especially if the area was recently shaved.

It will also not inhibit the amount you sweat.

Glycolic acid straight from the bottle will not act for long, as sweat from the armpits will dilute and neutralise its activity. This means even if it works temporarily, you’ll likely be back to your odorous ways pretty soon.

If you’re aiming to avoid chemical products, the best steps to an odour-free life are the obvious ones. Shower daily with soap (and dry off thoroughly), wear breathable fabrics (like cotton, linen or moisture-wicking sportswear), keep your clothes clean, reduce stress and limit your caffeine intake.

This article is republished from The Conversation under a Creative Commons license. Read the original article. 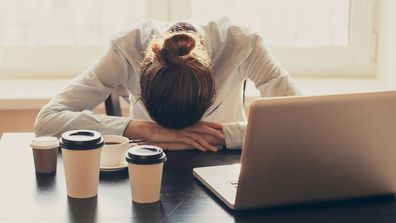