The act of ‘dry scooping’ involves ingesting pre-workout powder straight, without mixing it with water or milk as directed. The controversial craze quickly hit viral status with gym-goers and teens on TikTok testing out the risky challenge. As fails flooded the hashtag, one TikTok user, Briatney Portillo, 20, made headlines after it was revealed she had a heart attack after dry scooping her pre-workout supplement.

Unable to display TikTok on this browser

Thankfully she lived to tell the tale, however experts are concerned that many people still don’t fully understand the dangers that come with dry scooping.

So let’s get to the bottom of it, shall we?

“Placing things directly under the tongue is called sublingual administration and is common practice with some medications to help them absorb faster,” says Bailey.

“People claim doing this with pre-workout results in quicker absorption because it skips having to pass through the digestive tract to absorb.”

However, there are two major problems with doing this with your pre-workout sports supplement powders.

“Firstly, the trend of dry scooping is taking a scoop of powder straight into the mouth and then swiftly chasing it with a mouthful of liquid and swallowing, defeating the purpose of having something absorb under your tongue.

“Secondly, caffeine takes approximately 45 minutes to metabolise and have its ergogenic effects. In reality, even if you did let the whole scoop dissolve under your tongue, you might get a 15-minute head-start on absorption, but the benefit doesn’t outweigh the risks,” Bailey adds.

READ NEXT: The facts on protein (and the myths you can ignore)

Anyone reminded of the cinnamon challenge?

That’s because they’re quite similar, the cinnamon challenge that peaked in 2012, saw participants attempt to swallow an entire spoonful of cinnamon in 60 seconds without water, with the risk of choking equal to that of dry scooping.

Bailey admits that while pre-workout powders are more soluble than cinnamon, it’s a much smarter move to mix it with water — “saving your throat, lungs and dignity” at the same time.

“Caffeine is also a diuretic, meaning it encourages your body to shed water. Take coffee for example, having something like a cappuccino has a net hydrating effect as you are having a decent amount of fluid. A double shot of espresso on the contrary has very little liquid and could cause you to shed more water that you ingest, which can lead to dehydration.

A double shot of espresso is 160mg of caffeine, and some pre-workouts are 300-400mg, so it’s important to hydrate when having a higher dose of caffeine. Nothing will kill your training performance more than being dehydrated, irrespective of how high you’re flying on caffeine,” says Bailey.

Why is it more beneficial to mix protein powders with water or milk?

Other supplements like protein powder should also be mixed with something like water or milk. “If you were to try and dry scoop protein, good luck!” says Bailey, “A scoop of protein weighs in at 30-40g, roughly triple the weight of a pre-workout scoop.” 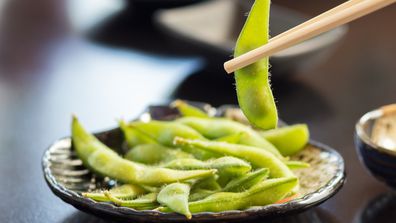